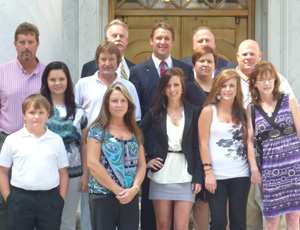 NEAL LAW BREAKING NEWS – On April 24, the Georgia Supreme Court unanimously ruled in favor of Mr. Neal’s clients, the Ryan Holt and Michelle Borror families and dismissed a City of Augusta electrical inspector’s appeal of the unanimous Georgia Court of Appeals opinion issued December 1, 2011 in favor of Mr. Neal’s clients, and Superior Court Judge Carl C. Brown, Jr.’s ruling in favor of the families issued in October 2010.  This five year saga for justice is nearing an end, with the Holt and Borror casino families now having the right to try their case for the wrongful deaths of Ryan and Michelle in a Columbia County courtroom.  The city’s sovereign immunity defense has been rejected by every Court in the State of Georgia who heard the case, including the highest court in the land.  Lead counsel Joseph R.  Neal, Jr., Esq., and his co-counsel, Doug Nelson, Esq., Charles Cork, Esq., and Chris Hudson, Esq. are privileged and honored to have led this fight for justice on behalf of Ryan and Michelle and look forward to trying this case to a jury in the near future.